I walk to the Trowbridge side of Dewing everyday on the way to class because there are way too many stairs on the opposite side. Also, it has always really bugged me that the cafeteria is on the top floor of Hicks. The amount of homework I have to do is positively correlated to how many library floors I climb (albeit, never more than three) before I pick a spot to sit down. Try to imagine Arcus not on top of Academy but at any other place on campus. How weird would it be if professors sat down and students stood up? Why does the tallest point on our campus—the only part of campus visible from the rest of the city—have to look so frickin’ phallic?

I am struck by the multitude of ways that differences in elevation are involved in the Kalamazoo College experience. We move from the intramural field to Arcus, entry to higher-level classes, the lower to upper quad, all to ascend this ivory tower. Here, elevation changes go beyond topography and brick structures. We are here to move up in the world, to climb higher than others have gone before. We are told to work hard, rise above, get perspective, but to also enjoy the peak of our youth. This is higher education, in every sense of the word.

I have been told that the brick house that sits at the very top of Academy used to be the house of the president. It’s a guest house now and receives very little attention from the campus. The hierarchy was pretty blatant at that time. With power and status, one moved from lowest to highest elevation forming a sort of elevation politics. At the bottom of the hill was facilities management. As you moved up you would reach the student dorms and academic buildings followed by the homes of professors (which are now living-learning houses), and, finally, on top of it all, was the house of the president. The president now resides in a home further towards the middle of the hill. Perhaps this move was made to portray their integration into the life of students or to appear more involved. Image is everything at an institution. Yet, there is a new resident at the top of the hill. Arcus, a center for social justice leadership, now rests at the pinnacle of campus. The work of the center is to challenge hierarchy and power structures, which is, seemingly, at odds with its permanent home at the apex of 1200 Academy Street. Its situation makes sense though. It’s a place for sharing perspectives, those which are often left unheard. So, what better vantage point is there for the center than above an institution?

Nevertheless, Arcus is not entirely removed from hierarchy. It is not exempt from the institution which, by its nature, is engaged in preserving itself. There really isn’t anything coincidental about Arcus. It is purposeful and attractive in all the right ways. It is Kalamazoo College placing social justice work ideologically and physically above everything else. Even above the president? Well, yes, because there are 32 people of higher rank. One of them happens to be the billionaire alumnus and sole funding source of Arcus. The campus pyramid remains intact.

Such height dynamics—elevation politics—further hierarchy within the classroom as well. Students sit and look up at their professors standing at the front of the room. Think of how wrong it would feel if students stood and professors sat down. On buses, younger people give up their seats to their elders. Sitting is, in this way, a luxury. However, giving up one’s seat on the bus is not solely a kind gesture. It is a recognition that the capable, more powerful one will stand and those who are not as able will sit down. Only a handful of my professors have ever sat down in class and I appreciate it every time.

Ascending is not entirely about hierarchy on this campus, although it’s worth noting that the two cannot be fully untied. Our politics of elevation play out in many different ways. ‘Going up’ can also be a pursuit of solace. As one moves from the railroad tracks to the Grove there is a noticeable volume difference. The same thing happens when you go up library floors (although in this case it is much less about solace and more about silence). Higher elevations bring a sense of reflection, perspective, and quiet.

There is also an unparalleled sense of awe that heights can provoke. Towers are observatories and people pay big money for the view. A penthouse apartment is one of the most expensive places to live. Over 3.5 million people visit the 102nd floor of the Empire State Building every year. Heights are such an enthralling human experience. When flying, I always note how silent passengers become when taking off. The rush of elevation change is terrifying, yet humbling. We crave the overview effect: a cognitive shift reported by astronauts after seeing Earth from outer space for the first time. It is a feeling of solitude and unity all at once. From far above it all, no borders or conflicts are visible. Everything becomes one big blue, white, and green dot floating in a void outside your window.

While the school no longer is religiously affiliated, it was founded by Baptists in 1833. This explains why the tallest point on campus is Stetson Chapel, what beautiful Christian imagery this is. Like Moses going up the mountain to speak with God, we go up the quad to a non-denominational chapel (where the Chaplain still says “Amen”). This spiritual space on campus is also the only building which surpasses the tree tops, making it the only visible portion of campus from the rest of the town.

An elevation change which has never made sense to me is how you have to go up three flights of stairs to get to the cafeteria (and two flights of stairs to get to Stacks). Eating is our most frequent encounter with nature. There is a grounding aspect to consuming things that come from the Earth. Apart from Hicks, I have never been anywhere before where you have to go up to eat. What house, condo, or apartment situates the kitchen on the third floor? Something about it feels so removed to me. This is another drawback of elevation. We lose our connection to the Earth…something institutions are good at encouraging.

We have been taught to value higher levels of thinking, higher GPAs, higher status, and higher topographical locations. There is a natural sense of wonder and accomplishment associated with reaching new heights. Yet, the overview effect only comes from altitude. ‘Moving up in the world’ is really only moving up in a system. I question whether or not the highest forms of education are capable of providing the big-picture self-awareness and feeling of connection that comes with seeing the Earth from outer-space. I like to think that we are trying.​ 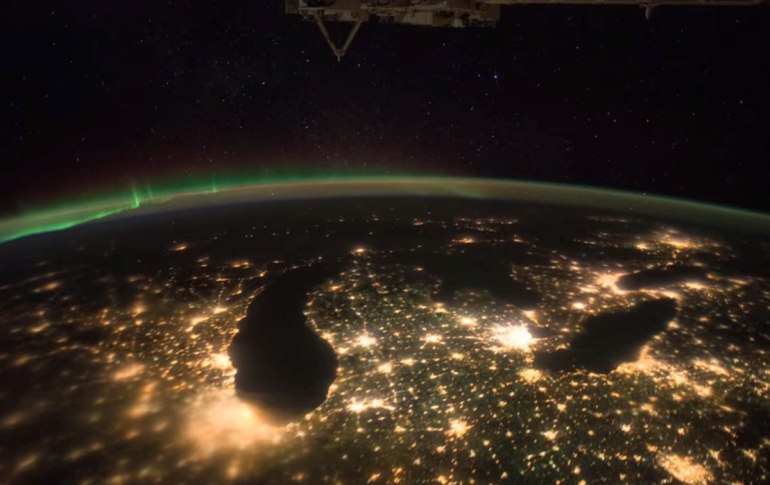